Foreign diplomats get immersed in Brazil’s agriculture in Bahia

Brazilian Farmers organized the sixth edition of the AgroBrazil Exchange Program. The project aims to bring foreign representatives and diplomats closer to the realities of rural Brazil. The group was made up of representatives from 10 foreign delegations: Algeria, Australia, Canada, Cuba, France, Indonesia, Germany, Malaysia, Thailand and Vietnam, which visited producers in the west of the Brazilian state of Bahia.

Brazilian Farmers believe the only way to have a realistic, thorough view of Brazil’s agriculture and livestock is through direct contact with local farmers.

“Brazil is a country with a remarkable diversity. When we bring embassy representatives to the fields, to know first-hand our production systems, we show that Brazil is committed to efficiency, and the international agenda of environmental protection and sustainability”, said Gedeão Pereira, Director of International Relations of the Brazilian Confederation of Agriculture and Livestock (CNA).

The first day of the mission was dedicated to visiting fruit producers and learning about the Paulo Mizote Model Farm in the municipality of Barreiras. The group interacted with students from the farm’s Agricultural Supervisor course, which simulates all farming processes focusing on the region’s main crops: grains and cotton. 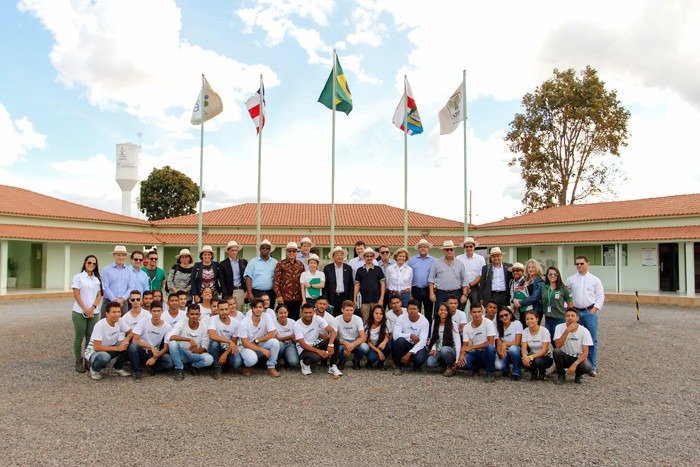 According to Richard Gregory Wallis, senior trade commissioner at the Australian Export, Investment and Education Promotion Agency (Austrade), these crops are also very relevant to his country’s economy. “Australia has a strong relationship with agriculture with Brazil. We have already visited several areas of the country such as Mato Grosso and Rio Grande do Sul. I saw interesting things about these crops. We can explore more business and investment opportunities,” he said.

Then the group visited Mariinha Fruits Farm. It focuses on fruit production, specifically papaya, which is produced for exports. Mariinha’s production system does constant pest control and monitoring of the fruits using traceability technologies. 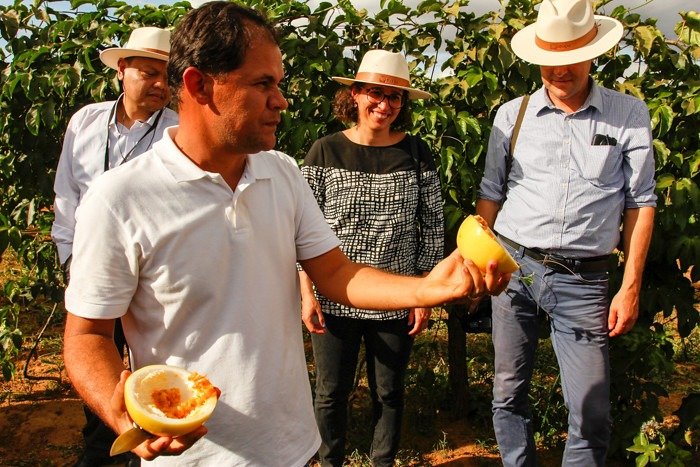 Farmer talks about some of the attributes of this products, showing a passion fruit at Mariinha Farm

“Mariinha fruits is a concept! We created this concept of food safety, upright quality fruit because the market and the world have changed. This is what they want.” said Joel Menezes, one of the two brothers who own the farm, named after their mother. The farm has 130 hectares of papaya plantations, with an expected production of 150 tons/year. The family also produces passion fruit, watermelons, lemon and lettuce in a hydroponic system.

“We invest in water control, fertilization and preventive pest monitoring, all of which ensures that our banana trees produce more than in other regions of the country,” says David Schmidt, one of the property owners. 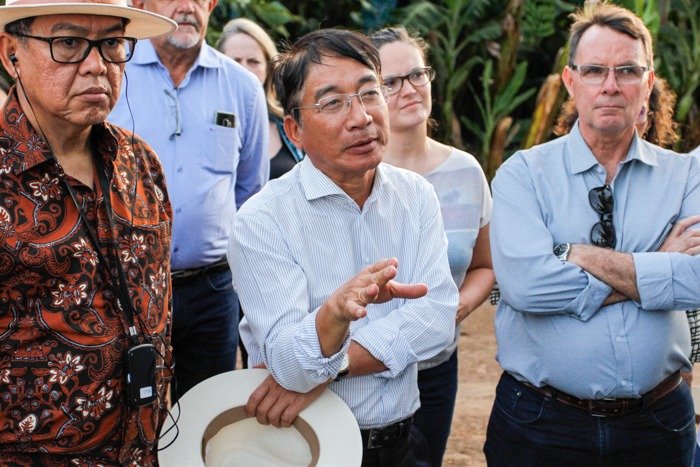 In addition to the technology invested, Santa Helena has developed a plant traceability system with QR Codes, where it is possible to identify production details. Another investment of the farm is in the lyophilization of the fruit (low temperature food dehydration process, where the food is frozen and the water is removed by sublimation), which increases the shelf life of the product. 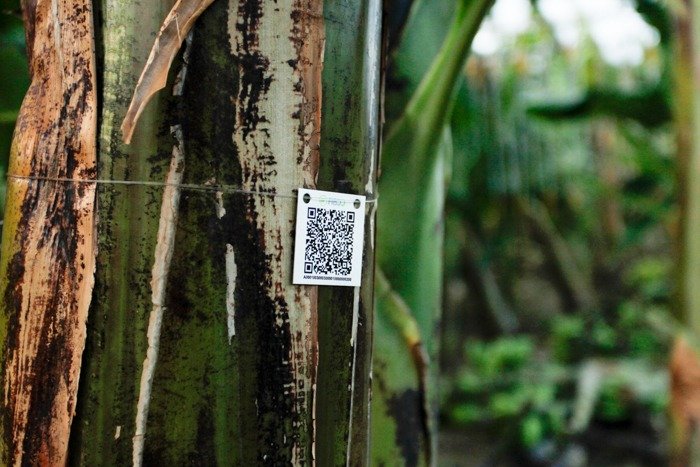 “This process maintains all the nutritional qualities of our bananas. No need to add anything… no sugar or preservatives. Our goal is to ensure to the consumer a product as natural as possible,” said Moises Schmidth, a rural producer and president of the Union of Rural Producers of Barreiras. 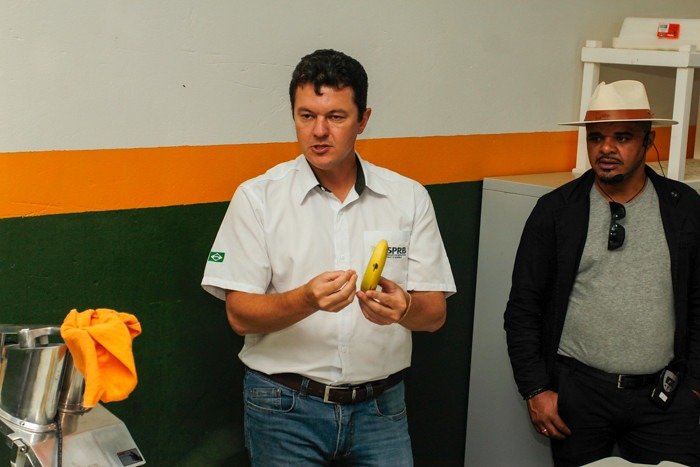 For the Cuban Embassy counselor Yoneski Gutiérrez, the experience was enriching because he was able to learn about the Brazilian experience in fruit production, which will serve as an example for Cuba, he hopes.

In the municipality of Luis Eduardo Magalhães, the delegation visited animal confinement and cotton processing companies. The municipality is known as the newest agricultural frontier in Brazil. The region’s productivity drew the attention of the foreign delegations.

“It is very good to know the production process of beef cattle and if the project develops, it will bring income improvement for the local population and also for the economy of the state of Bahia,” said Do Ba Khoa, Vietnam’s ambassador, referring to Captar, Project for Integration of the Beef Cattle Production Chain that aims to unite the production of the Semiarid and the Brazilian region of MATOPIBA. 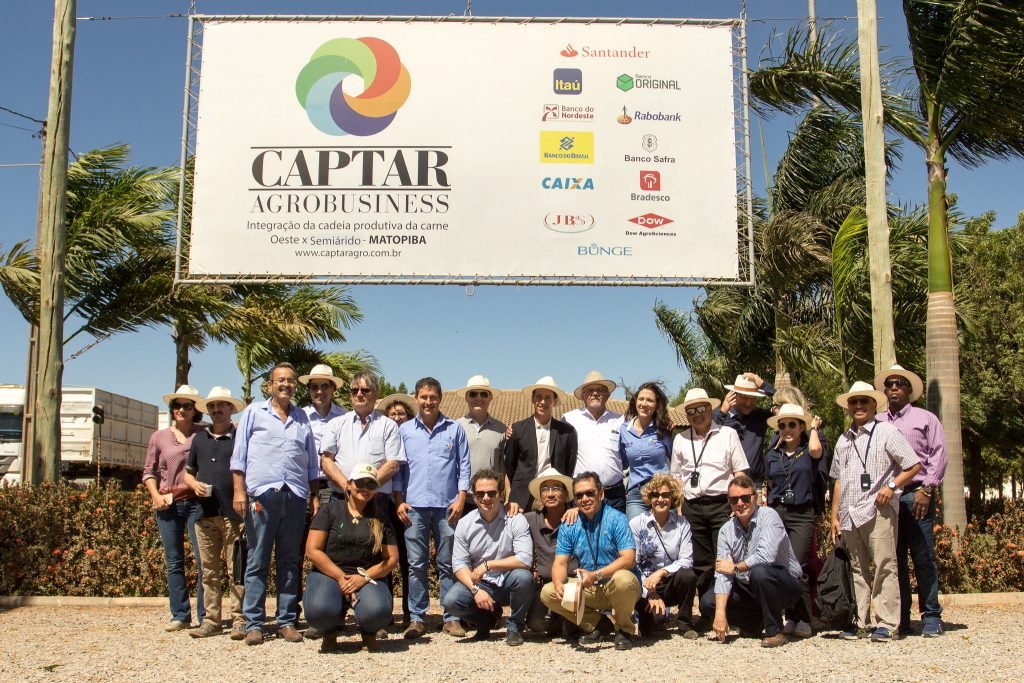 Since 2010, Captar has been working in the confinement of Nelore and Angus breeds and in the manufacture of animal feed and manure with a focus on sustainable beef production. The intention is to include small and medium producers in sharing technologies and optimizing the production chain so that all producers have better gains.

“The region has great potential for production matrix. Technology is one of Captar’s foundations and we aim to break the cycle of local poverty,” said Almir Moraes, the company’s owner.

Guilherme Moura, Financial Vice President of the Bahia’s Federation of Agriculture and Livestock (Faeb), spoke about the state’s productive potential and highlighted the producer’s access to technical assistance for the development of production. “Technical assistance brings access to technology to small and medium producers. The producer can be more professional and competitive by turning his property into a business,” said Guilherme. 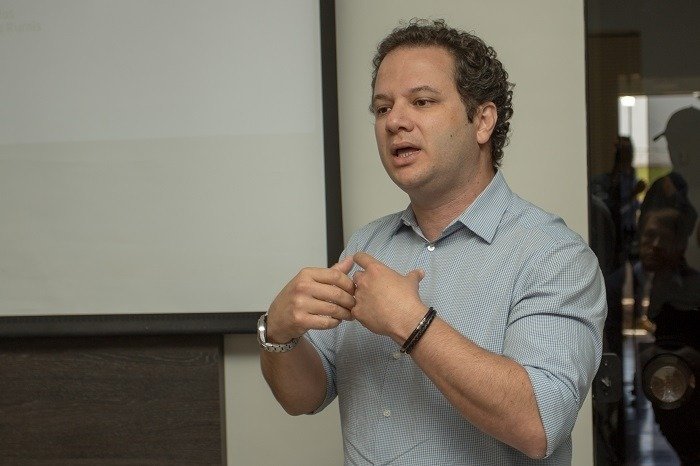 Guilherme Moura, from Faeb presented data on the growth potential of the state’s agricultural production.

Another destination for the group was Algodoeira UBahia, a cooperative that processes cotton for exports. “The quality of Brazilian cotton is one of the best in the world. Today I had the opportunity to know the production process of local companies and understand how the quality of the product is ensured,” said Phitchanan Panadamrong, First Secretary at the Thai Embassy.

The Asian country is among the top 10 cotton importers in Brazil and last year imported US$ 10 million from Bahia alone. 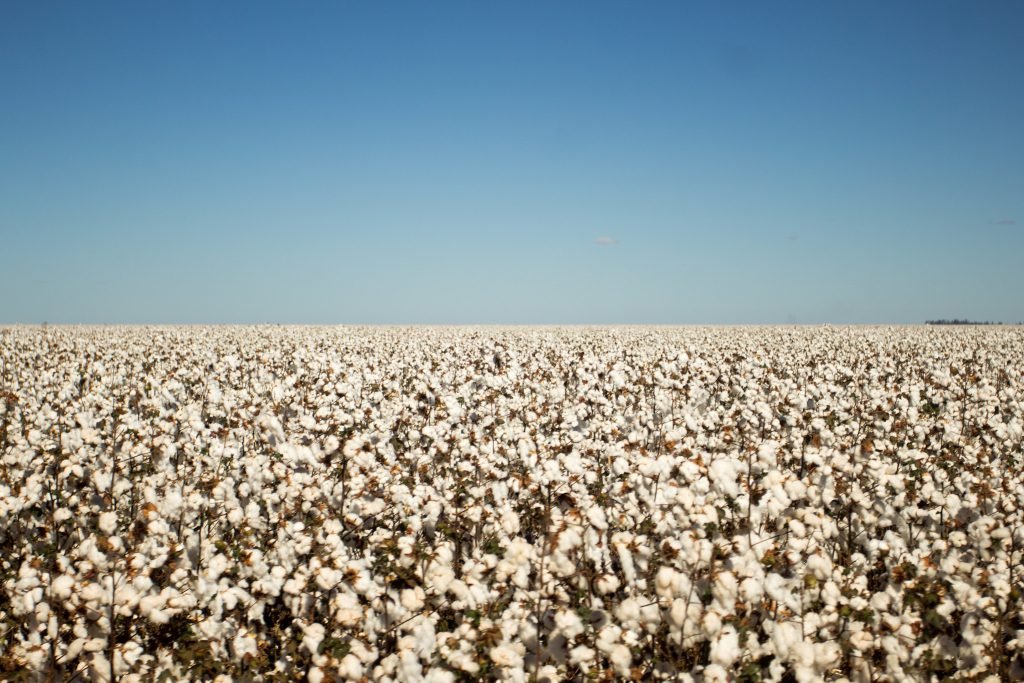 The cooperative has been around for three years. It unpacks, presses and bales cotton in bales. “We export around 80% of the cotton produced. We could export 100% because the quality of Bahia’s cotton is the best in Brazil,” said Ricardo Weber, one of the owners of Algodoeira.

On the third day of the exchange program, the group visited soybean and cottonseed production and learned about automation and intelligent machinery systems.

To Radihisham Bin Ismail, a trade attaché at the Malaysian Embassy, “knowing Brazil’s agricultural production is important. My country is small and needs this knowledge to increase production.” 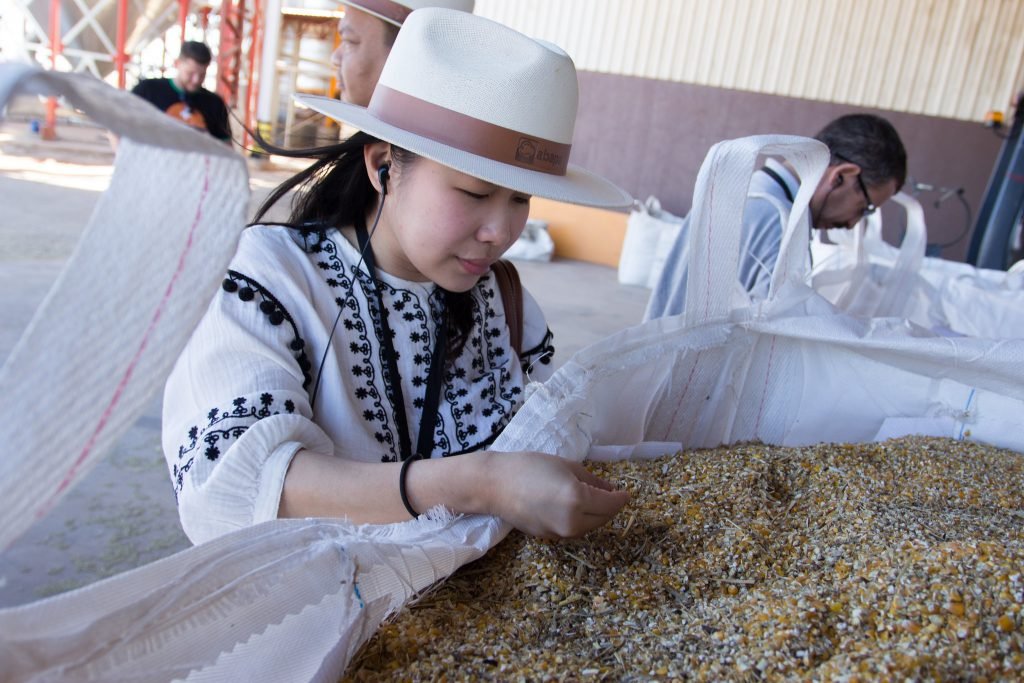 Phitchanan Panadamrong of Thailand observes maize residues. With the use of technology, even the residues are used by agricultural companies for cattle feed, fertilization or power generation.

The group visited Seeds Oilema, a company that produces 20 thousand hectares of soy in the Barreiras region. It is a family business, which invests in the development of soybean seeds in search of new varieties. 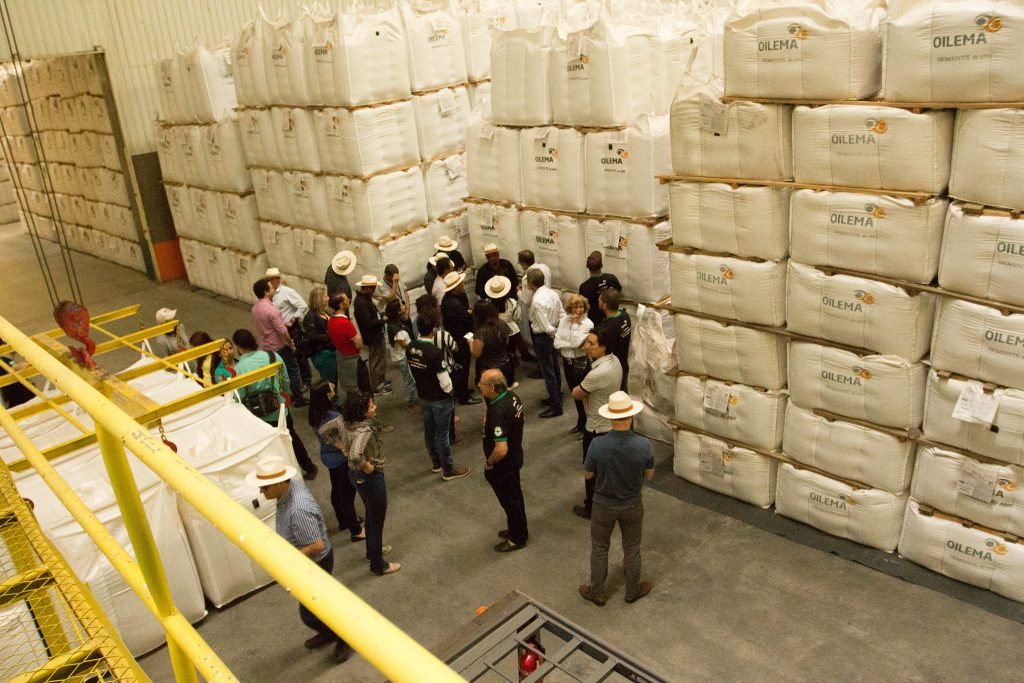 “The growth of Seeds Oilema was due to technology, research, and cross breeding. The marriage of techniques, management and professionalism, brought success to our brand,” said Carminha Gatto, one of Oilema’s partners.

The visit to Oilema took place during the Accident Prevention in Rural Work Week (SIPATR) promoted by the company, with the participation of 270 employees. The event featured several lectures on improving quality of life and accident prevention given by the National Rural Learning Service of Bahia (Senar BA). 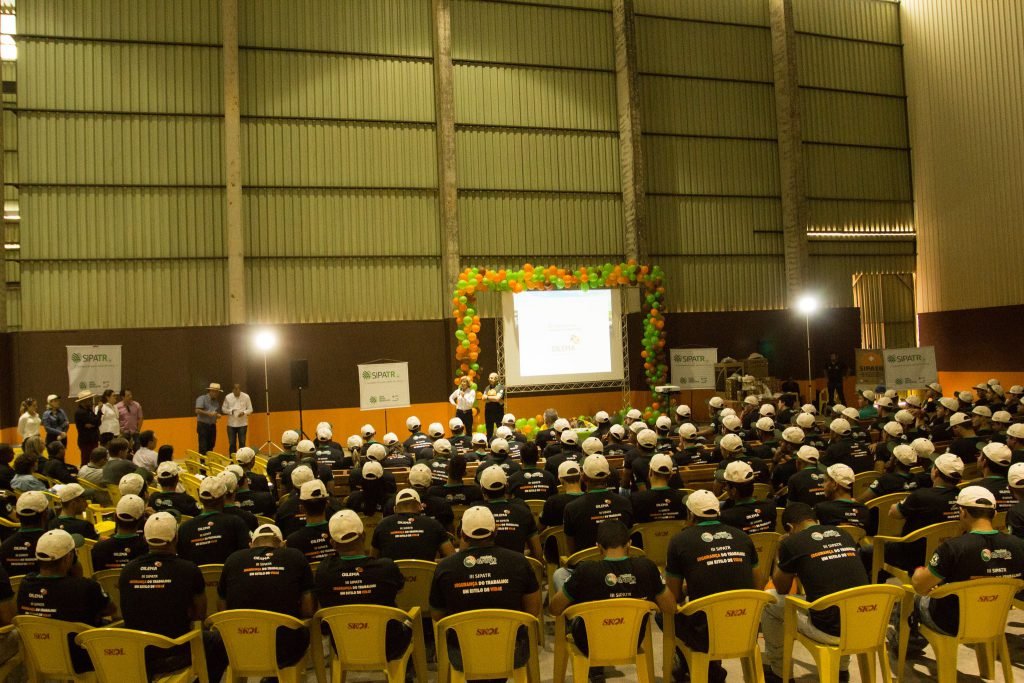 Farm staff is trained by Senar Bahia at Oilema Seeds

“It was very important to know the production in this region and potential of Brazilian agribusiness,” said Ansgar Aschfalk, Food and Agriculture Advisor at the German Embassy. 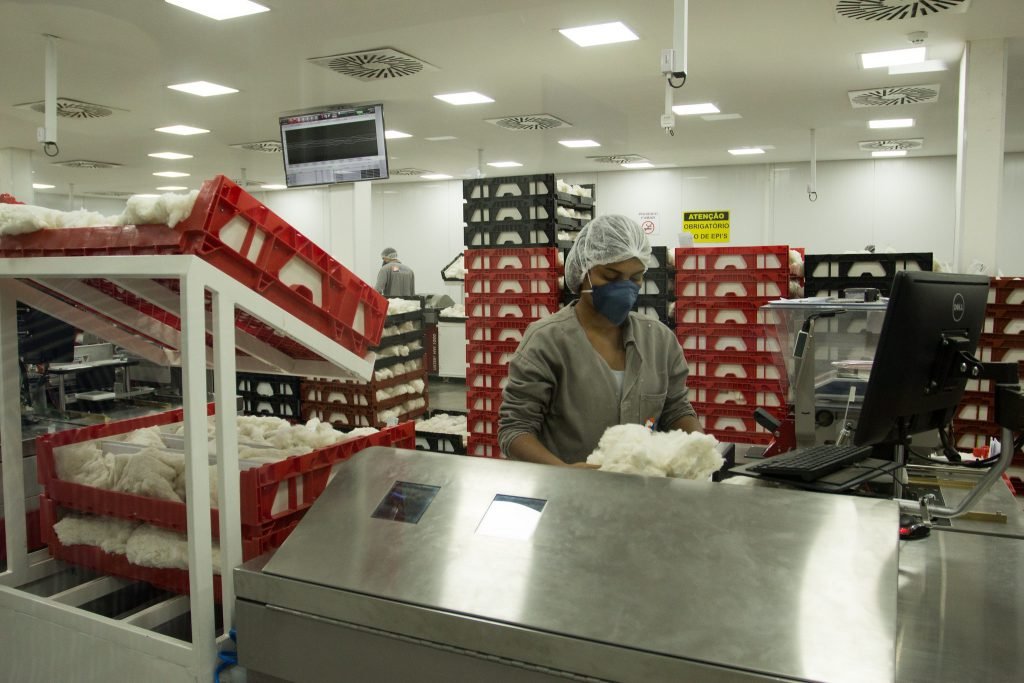 The group also visited the cotton field, with a close view of the harvest at Schmidth Agricola’s Orchids farm. The company produces grains, fibers and fruits.

“In Bahia there is a favorable climate that provides intrinsic qualities to cotton produced here, compared to other parts of the country. What sets us apart is that we can plant cotton at the beginning of the rainy season, staying with rain for the entire growing period and, when the cotton matures, the rain ceases and the time comes for harvesting it. This makes the cotton of Bahia one of the highest qualities ones. It is said that Bahia cotton is better compared to irrigated cotton like in Australia, for example,” said Moises Schmidth. 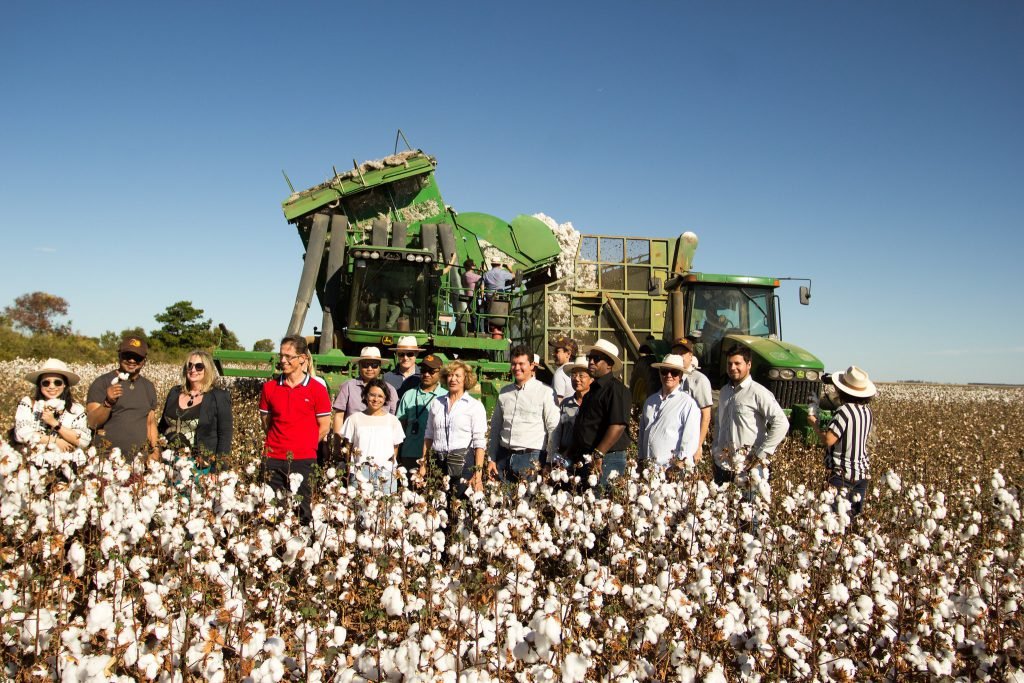 “AgroBrazil is a unique moment to be in contact with buyers and customers of our products. They, in turn, are checking the quality of our cotton firsthand,” said Moises.

The day of visits ended at the Cotton Fiber Analysis Laboratory of the Bahia’s Cotton Producers Association (Abapa), the largest in Latin America. They have 14 state-of-the-art machines and process 30 thousand cotton samples per day, following international classification standards. The lab works seven days a week and 24 hours a day during the harvest season. The analysis evaluates fiber length, color, and uniformity, among other characteristics. 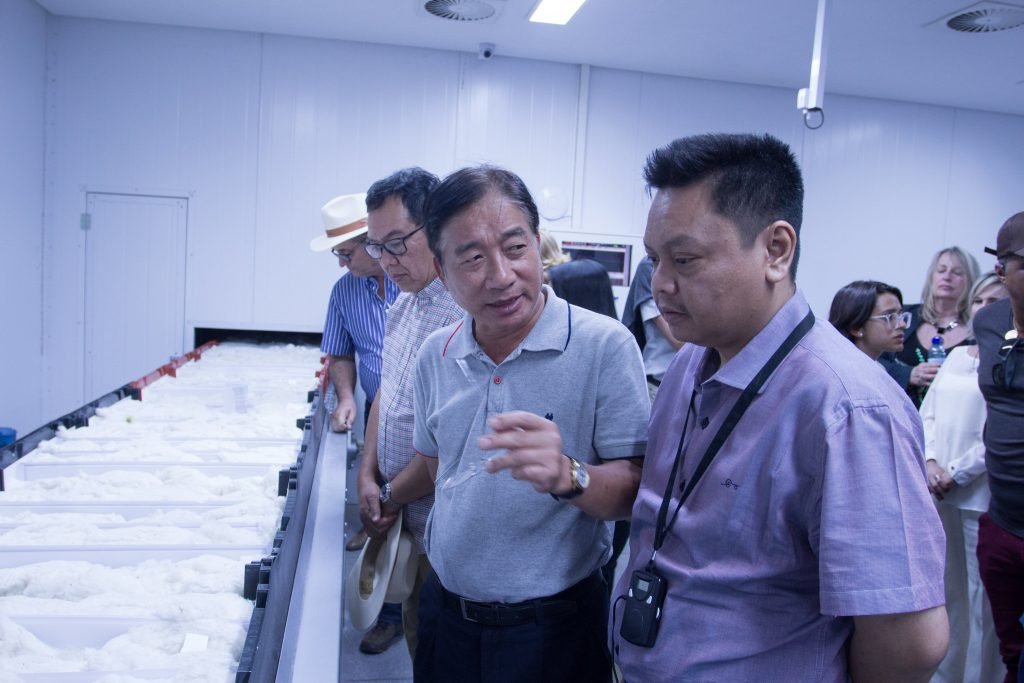 “All these characteristics are issued in a report that is passed on to the producer to use when selling the product both domestically and internationally,” said Lidervan Morais, Abapa’s executive director.

The sixth edition of the AgroBrazil program came to an end August 8, Friday, with a visit to Ipê Farm, owned by Stefan Zembrod. Stefans focuses on sustainable production of Nelore and Angus cattle. There are all stages of production, from animal insemination to meat commercialization.

“We reuse everything we produce on the farm. We are self-sufficient in fuel. All of our machines and tractors are fueled by the biofuel we produce. We produce the energy we use in our headquarters and in the mill where we process the cottonseed from which the biodiesel oil comes out,” explained Zembrod.

Indonesian ambassador Edi Yusup said it was very important to know about the Brazilian beef industry in western Bahia.

“I learn best when I have real contact with things. After these visits I became more aware that Brazilian cattle ranching is very good. So I hope Indonesia will start buying Brazilian meat as soon as possible,” said Yusup.

In addition to energy self-sufficiency, the farmer works with pasture rotation to respect the growth of each type of grass and closed confinement in the rearing and fattening. Zembrod stressed that his property follows the entire protocol of Sisbov (Brazilian Beef and Bubalina Chain Traceability Service).

The Ipê Farm has 12 thousand hectares. The producer stressed that the quality of the meat he produces comes from investment in genetic improvement in partnership with other farms and the use of technologies such as embryo transfer and donor molecular marker. 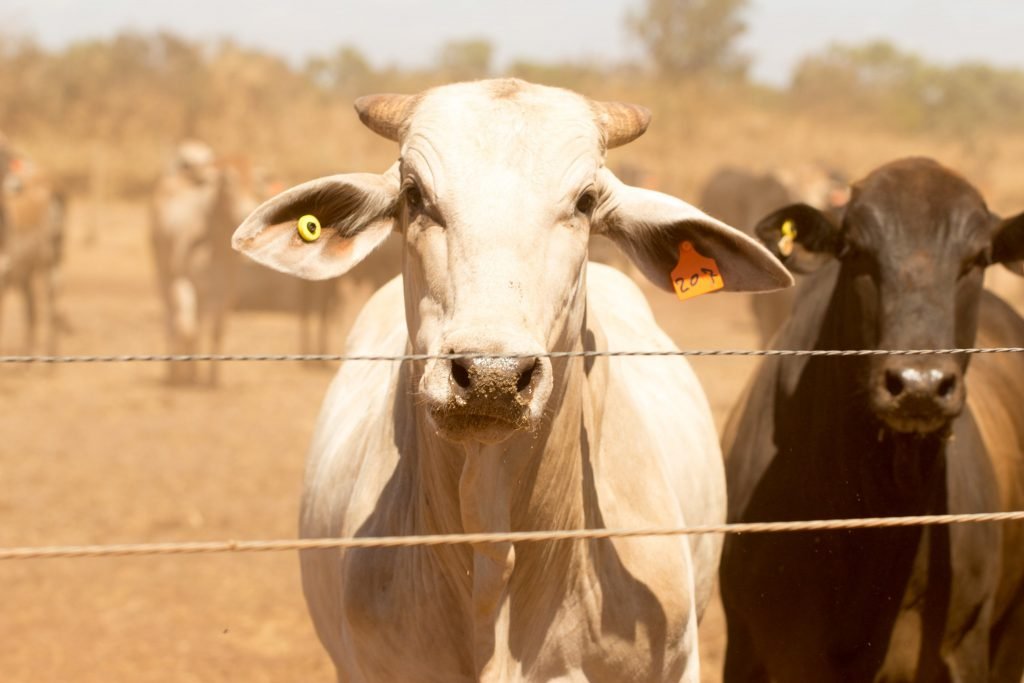 “The business was built on five pillars: sustainability, health, nutrition, management and genetics. We value the environment,” said Zembrod.

He took advantage of the Area of Permanent Preservation (APP) and legal reserve areas, which correspond to 2.7 thousand hectares of the property, to invest in beekeeping. “It is an area that has a very good flowering, so we put bee boxes. Not only they help with pollination, but they also produce honey. Next year I intend to produce 70 tons of honey and in the following double the production,” he said.

Zembrod also has a meat franchise in Barreiras, with 40 types of fine beef cuts, taken from farm-produced animals.

For the counselor at the Cuban Consulate in Salvador, Yoneski Gutiérrez, knowing how Brazil produces and the quality of its products will help Cuba in negotiations of future partnerships. 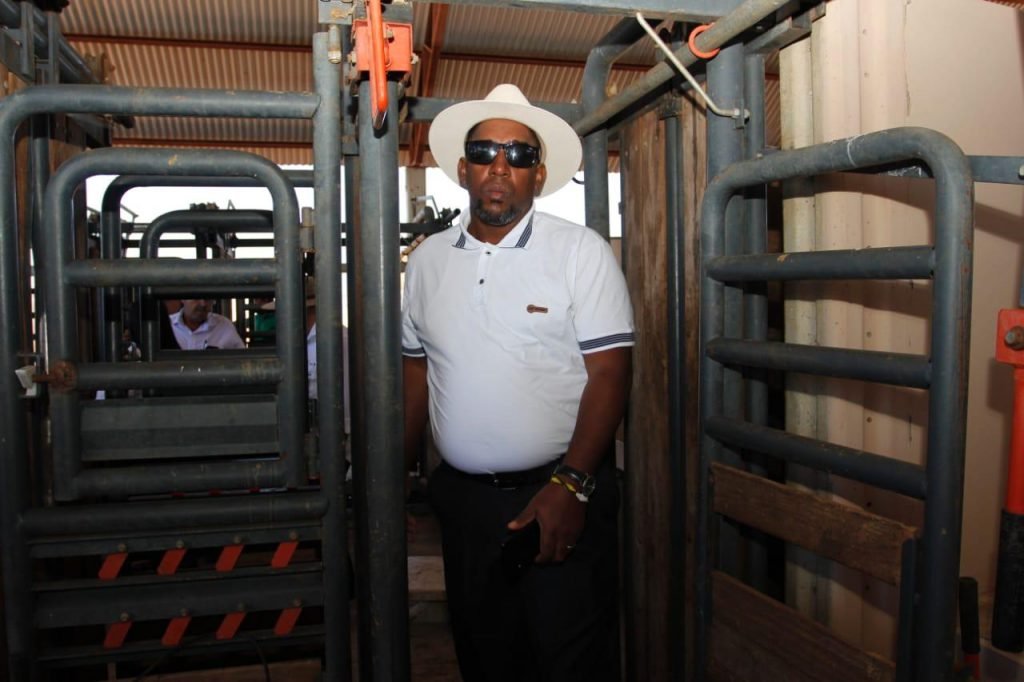 In the assessment of CNA’s head of International Relations, Lígia Dutra, AgroBrazil showed foreign delegations the western tip of Bahia’s agriculture and the development that agribusiness has brought to the region.

“It is very important for Brazil’s trade relations that our partners know the sustainability of our production and the great socio-economic impact that agricultural activity brings to the country,” said Dutra.

The location of the next edition of the AgroBrazil Exchange Program is as of yet undetermined. For more information, stay tuned for news on the Instagram and Twitter profiles.