The year of 2018 ended with excellent news for the Brazilian agricultural sector. For the first time in history exports surpassed US$ 100 billion, reflecting the economic strength and productive potential of the country’s agriculture.

2018 was also a year marked by complex challenges faced by the sector, such as the nationwide truck drivers’ strike, which paralyzed the country and made it nearly impossible to move goods to the ports of exit. Nonetheless, Brazilian farmers and ranchers did their job with mastery! They invested in technology, adopted more efficient and sustainable production practices, and secured a record high in exports. From January to December, foreign sales totaled US$ 101.7 billion, an increase of nearly 6% compared to the year before. 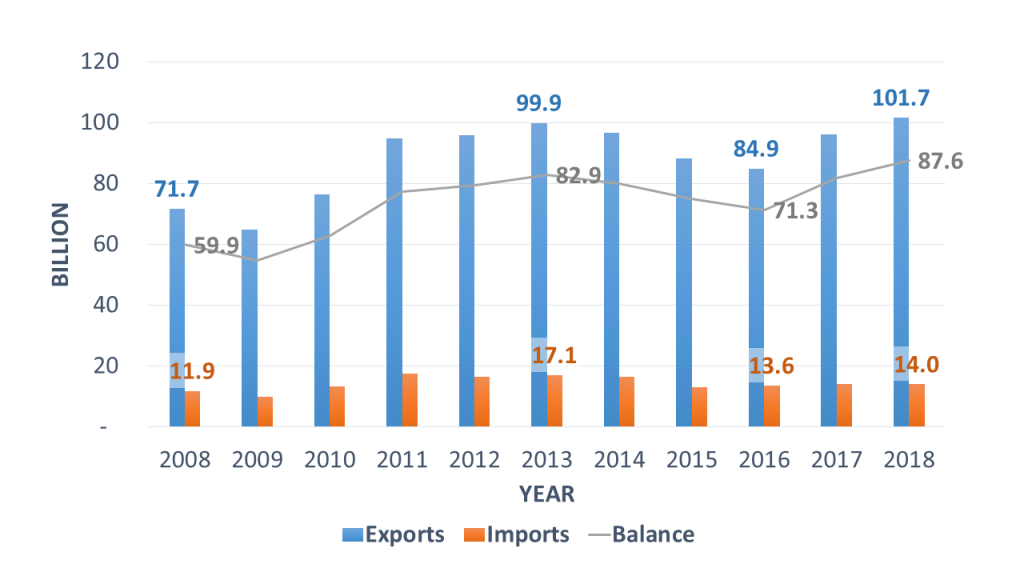 Products and destinations: a quick look at Brazil’s agriculture in 2018

The increase in agricultural shipments was driven mainly (but not exclusively) by exports of soybeans (in grain and meal), pulp (cellulose) and fresh beef. Together these three products registered a growth of US$ 11.8 billion in exports compared to 2017. They were also the most-sold items, totaling US$ 54.8 billion, or 53.9% of the total ag. export value.

The main destinations of agricultural exports were China (including Hong Kong), who purchased US$ 38.1 billion worth of Brazilian goods.  The European Union came in second place, with US$ 17.8 billion in purchases, followed by the United States (US$ 6.8 billion), Iran (US$ 2.2 billion) and Japan (US$ 2.1 billion). The aggregate purchases from these five countries accounted for 65.9% of Brazil’s total agricultural exports.

Despite the high value of trade with these partners, in 2018 Brazil sought to expand and diversify its range of partners. For instance, the sector recorded impressive increases in exports to countries like Turkey, Chile and South Korea. 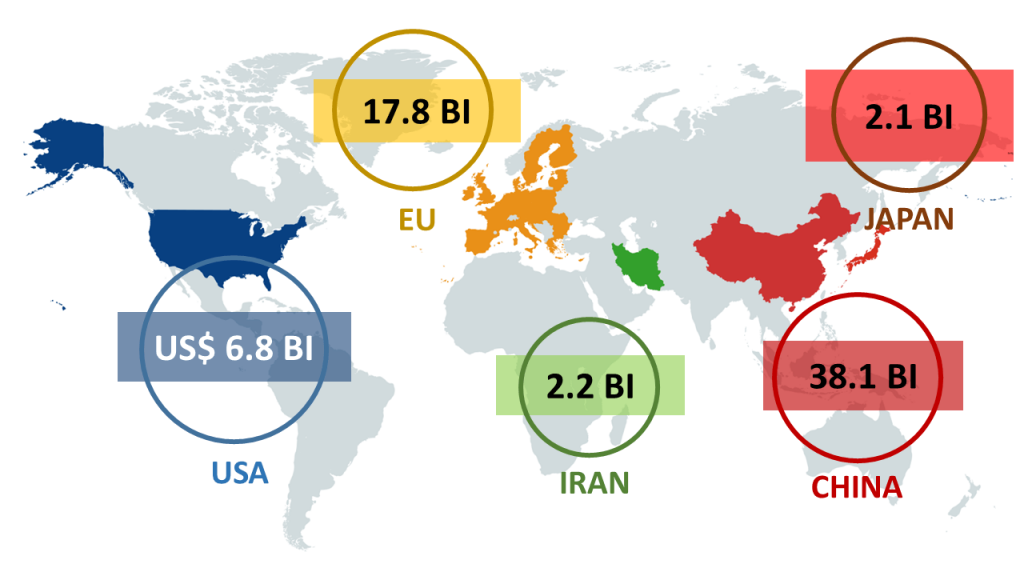 Turkey raised its imports from Brazil’s agricultural sector by 73.5% last year. This was mainly due to its imports of soybeans (+ US$ 416.5 million). Brazil has gained market share in soybeans – partly from the U.S. and Ukraine – and in live cattle (+ US$ 234.2 million).

In the Chilean case, the increase in exports reached 29.2% in 2018. Brazilian fresh beef and paper exports stood out, with increases of US$ 186.6 and US$ 106.1 million in sales, respectively, compared to the previous year.

South Korea increased its imports from Brazil’s agriculture by 15% in 2018. In addition, Brazilian farmers and ranchers openly defended the official initiation of the negotiation for a trade agreement between Mercosur and South Korea. At the end of 2018, the Brazilian government publicly announced its intention to launch negotiation of a comprehensive trade agreement with South Korea, which should generate great future opportunities for trade and investment in both sides of the world.

These are great and stimulating news to receive right in the beginning of a promising new-year for Brazilian agriculture, don’t you think?

It’s time for Brazil in Singapore!