The Macedonian Ambassador to Brazil, Mr. Ivica Bocevski, and the President of the Brazilian Confederation of Agriculture and Livestock (CNA), Mr. Joao Martins, met in Brasilia to discuss cooperation opportunities between the two countries in the agricultural sector.

It was the first official visit of the Ambassador to the house of Brazilian farmers and agriculture. “The Brazilian agricultural sector is highly competitive. We are interested in pursuing international cooperation,” said the Ambassador.

President Martins presented the CNA System and stressed its role as the main forum for discussing agriculture-related issues and policies in Brazil. For nearly 70 years, the organization has been working to defend the interests of rural producers and their families, domestically and internationally.

He also presented the CNA Institute, the research branch of the System, and the National Rural Learning Service (Senar), which is responsible for technical training, managerial assistance and social promotion projects, including the CNA College, which offers undergraduate and post-graduate programs in agricultural management.

According to Ambassador Bocevski, Macedonia – already a large importer of Brazilian chicken meat – is interested in expanding the consumption of Brazilian agricultural products.

“Approximately 95% of the chicken meat consumed in the country comes from Brazil. Now, we are interested in importing Brazilian pork and in doing more business with Brazilian companies,” he said.

In 2017, Brazil exported nearly US$ 19 million worth of chicken meat to Macedonia, according to data from the International Trade Centre (ITC).

According to the ambassador, Macedonian researchers and entrepreneurs should visit Brazil on a technical mission of the Minister of Agriculture to witness, first hand, the high potential of the Brazilian agricultural sector and to discuss bilateral cooperation opportunities in more details. 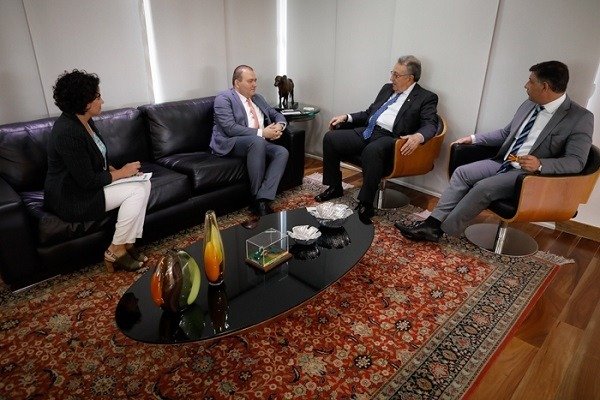 In addition to the President of the CNA and the Macedonian Ambassador, the General Director of Senar, Mr. Daniel Carrara, and CNA’s head of International Relations, Ms. Ligia Dutra, also took part in the meeting.

A trip is worth a thousand pictures