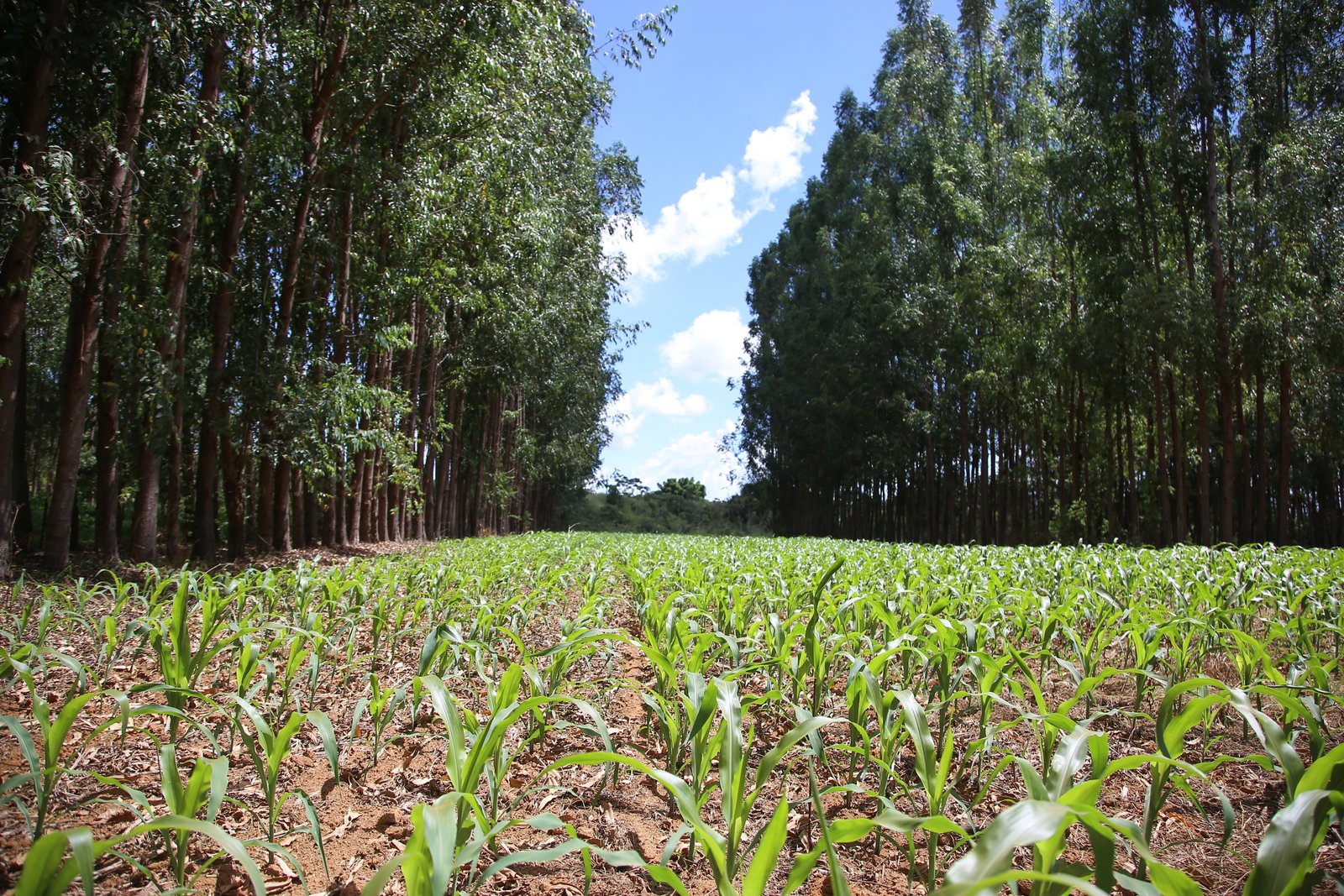 Add to this some of the toughest environmental measures for a farming sector anywhere in the world, with a minimum set-aside of at least one-fifth of every farmer’s land for native vegetation, and as much as 80% in many areas. In short, Brazil  has become an agricultural success story by sustainably managing the expansion of farming.

Brazil is the first emerging economy to commit to an absolute reduction in greenhouse gasses.[1] It has a comprehensive strategy to reduce GHG emissions from agriculture based on the Low Carbon Emission Agriculture Program (ABC).

Having reduced its emissions by 36% in 2016 in relation to 2005 levels, Brazil’s current actions against climate change represent one of the largest undertakings by any single country to date.[2] Farmers are well aware that only the adoption low-carbon agricultural practices and the strictly regulated expansion of agriculture can ensure the long-term economic, social and environmental sustainability of the sector.

This is in line with Brazil’s plan under the National Policy on Climate Change (PNMC) to reduce greenhouse gas emissions under the Paris Agreement.[3]

Protecting our forests and natural vegetation

Brazil is a vast country – almost twice as big as the EU[4] – yet it uses only three out of every 10 hectares for agriculture[5]. Compare that to countries like Ireland or the UK, where the proportion of land dedicated to agriculture is over 70%.[6]

With a highly-urbanised population (86%)[7] concentrated mostly along the eastern seaboard, two-thirds (66.3% or 564.6m ha) of Brazil’s landmass is preserved in native vegetation, forests, savannah and wetlands. To give you an idea of what that means in terms of size, the entire EU could easily fit inside the legal Amazon. 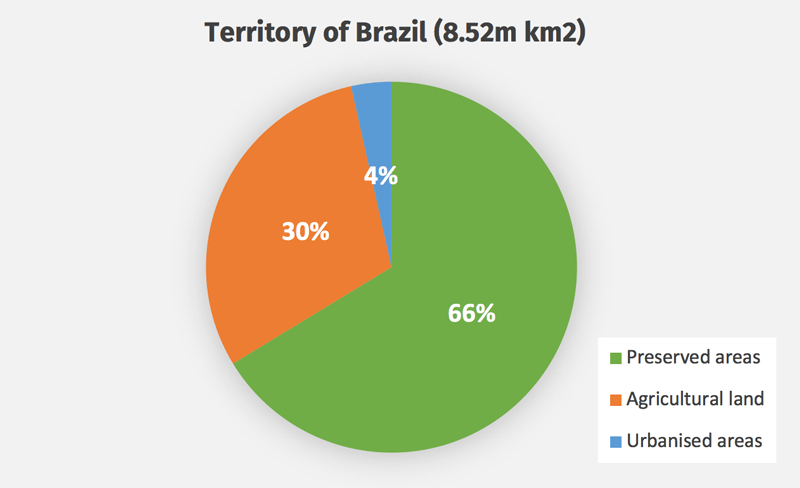 Perhaps a more significant statistic is that 26.7% of Brazil’s territory is covered in preserved native vegetation within rural private properties.

Brazil has probably the strictest environmental protection laws and practices relating to farming in the world.

Its celebrated Forest Code requires all farmers, wherever they are, to set aside at least one fifth of their land to native vegetation. This figure rises to 35% in the Cerrado and to 80% in the Amazon.

It also forbids clearing primary vegetation from steep slopes and along the margins of rivers and streams, all of which are classified as ‘areas of permanent protection’.

Farmers do not receive any subsidy or compensation for this legal set-aside and must factor it into their overall farming and farm management economics. The code is effectively enforced using Brazil’s Rural Environmental Registry (Cadastro Ambiental Rural – CAR).

Registration on this electronic database is mandatory for all rural properties in the country, and compliance is almost 100% of all properties having been registered by 2020.

The CAR allows for effective monitoring of all properties registered, as well as for applying enforcement methods. For example, non-compliance with the Forest Code will see property owners denied access to any credit facility by any of Brazil’s rural lending institutions. Brazil’s Forest Code is the most restrictive and sophisticated legislation of its type in the world and is a model for conservation and forest preservation in agriculture.

Complying with the Forest Code is part of the obligation of rural landowners who have been contributing to the reduction of deforestation. Currently, 49% of the Cerrado Biome are preserved — 28.9% of that are on private property. In the Amazon Biome, 84.1% of the native vegetation are preserved, 22.4% of which are in rural properties.

Reducing deforestation in the Cerrado Biome exceeded the voluntary goal of 40% by 2020, reaching 53.2%. In the Amazon Biome, the reduction was 43% from the 80% proposed by 2020, which still represents an improvement from 2012. The country does not only need to fight illegal deforestation, but also to invest in Low Carbon Emission Agriculture (ABC). Around 52 million hectares have implemented these technologies in the Brazil.

Brazil’s small percentage of cropland was enough for the country to become the world’s biggest producer and exporter of coffee and sugar and the leading exporter of soyabeans.

This is in part thanks to the fact that Brazil is huge, a continent-sized country, but it is also largely thanks to its drive for and focus on sustainable increased productivity. Between 1970 and 2012 rice, bean, maize and soyabean yields grew by an astonishing 583%, and continue to improve today.

Where agriculture does need to expand, Brazil is primarily focused on the restoration and conversion of degraded pastures and extending the use of integrated crop-livestock-forestation systems.[10] Brazil aims to restore 15m ha of degraded pasturelands by 2030 and

12m ha of degraded forests, as well as extend ICLF systems to a further 5m ha.

This is in addition to extending no-till farming currently used on 40m ha of land (over 60% of the grains area),

and increasing the share of bioenergy from biofuels in the country’s energy matrix to 18%, considering consumption in 2030.

Brazil as an example of low-carbon agriculture practices

Research produced by Embrapa found that Brazilian cattle emit up to 20% fewer GHGs than the 56kg/year average for Latin America estimated by the UN Intergovernmental Panel on Climate Change (IPCC). Embrapa found that methane emissions are lower if cattle feed on fibrous and more digestible food.

ICLF is an especially effective farming system for GHG reduction because the organic matter of the soil and the integrated trees capture carbon that would have otherwise been released into the atmosphere. It is estimated that about 90% of the global agricultural mitigation potential by 2030 rests in soil carbon sequestration.[15]

That is why Brazil is continuing to spread ICLF systems across the country. Brazil’s extension of the ICLF system to a further 5.96m ha of land in 2010-15 resulted in the sequestration of a massive additional 21.8m tonnes of CO2eq.[16]

That’s the equivalent of taking 4.7m cars off the road for one year. Under the Paris Agreement Brazil will extend ICLF to a total 16.5m ha of farmland by 2030. No-till practices, currently used by 45% of farms, also contribute to the minimisation of GHG emissions by up to 40%.

No-till maintains permanent soil cover that stops carbon from leaking into the atmosphere and reduces the operation of farm machine equipment.

Agriculture as a source of renewable energy

Brazilian agriculture is a major provider of renewable materials used to substitute petroleum and reduce CO2 emissions. Thanks to sugarcane ethanol and bioelectricity, sugarcane is the largest source of renewable energy in Brazil. It makes up 16.9% of the country’s renewable energy output – which in 2016 was 43.5% of all energy generated (in comparison, the world average renewable energy ratio was 13.5% and that of OECD countries was only 9.4%).[17]

Bioelectricity is produced from bagasse, the residue left after sugarcane is crushed. Experts estimate that sugarcane bioelectricity could cover almost a quarter (23%) of Brazil’s electricity needs by 2023. It is especially useful during the dry season, when bagasse is abundant and when hydroelectric dams may have reduced output. Moreover, the majority of sugar and ethanol plants are located fairly close to the more populous regions of Brazil, where electricity demand is the highest.

Sugarcane ethanol is a highly valuable clean energy source in the Brazilian transportation sector. It has over 70% fewer emissions than petrol, or 55% when indirect land use changes are taken into account. Brazil has replaced more than 40% of petrol consumption with ethanol, saving in its flex-fuel car fleet alone an average of 28.5m tonnes CO2eq per year. That’s 4.75 times more than the entire EU saved in 2015.[18]

Sugarcane is grown on only 17% of the total cropland in Brazil, or just over 1% of the entire national territory. To suggest that the sugarcane used for energy represents ‘fuel-for-food’ is therefore nonsense. In 2016 the sugarcane cultivation represented 10.8m ha, producing 665.6m tonnes of sugarcane, 33.5m tonnes of sugar and 30,500m3 of ethanol.

Brazil is the most important producer and exporter of sugarcane worldwide with a share of 48% of global exports. Sugarcane ethanol is one of the few biofuels that are available to the transport sector now and that can help countries across the globe to make significant contributions to CO2 emissions savings.

The sustainable expansion of sugarcane cultivation is regulated by the national policy Agroecological Zoning of Sugarcane. It is forbidden to plant it in the Amazon, the Pantanal, and the Upper Paraguay River Basin, areas of native vegetation, national parks, indigenous areas or on other protected land. There is also a total prohibition of deforestation for sugarcane plantations. The two major areas of Brazilian sugarcane production are about 2,000km from the Amazon rainforest. That’s the distance from Belgium to the Black Sea.

[1] Friends of Europe. Brazil becomes first emerging economy to commit to absolute emissions reduction, 2015
[2] Brazil’s Intended Nationally Determined Contribution, 2016
[3] Ministry of Science, Technology, Innovation and Communications Brazil (INPE), Ministry of the Environment Brazil (MMA)
[4] 8.52m km2 v 4.32m km2
[5] 30.2% or 257.3m ha
[6] EC Eurostat, Farm structure statistics
[7] World Bank Urban Population 2017
[8] The project PRODES conducts satellites monitoring of deforestation in the Legal Amazon and has been providing annual deforestation rates in the region since 1988 which are used by the Brazilian government. It is the result of the Action “Environmental Monitoring of the Amazon” based on the collaboration between the Ministry of the Environment and the Ministry of Science, Technology and Innovation.
[9] NASA’s Land Processes Distributed Active Archive Center 2017