By Robin Carr – graduate student at the School of Global Policy and Strategy (GPS) at the University of California, San Diego (UCSD). Robin specializes in international economics and in 2020 worked on projects related to Brazilian agriculture and international negotiations.

In a bid to increase Foreign Direct Investment (FDI), Brazil has applied to join the Organization for Economic and Co-operation and Development (OECD). While not a member, Brazil has a long history of being an OECD partner country. The US has floated a proposal to support such a bid in return for Brazil giving up its status as a Developing Country in the World Trade Organization (WTO).

Since the 1994, 12 countries have joined the OECD: Mexico, the Czech Republic, Hungary, Poland, South Korea, Slovakia, Chile, Slovenia, Israel, Estonia, Latvia, and Lithuania. Before this period the last country to join was in 1973, a gap of 20 years. Of these only Chile, Hungary, Mexico and Poland can be considered major agricultural exporters. 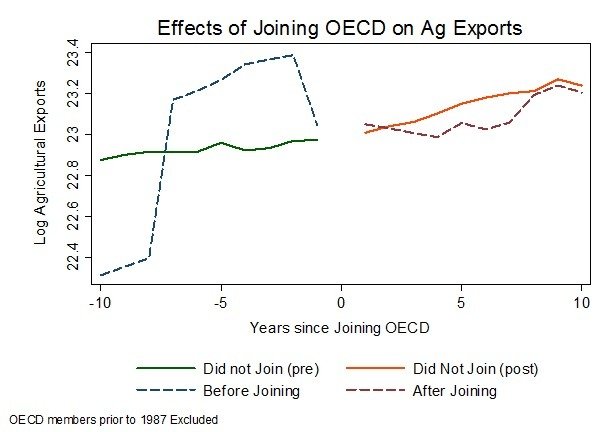 In addition, being an OECD member has no statistically significant impact on GDP growth rates or FDI. However, it is associated with a decrease of 25 percentage points in greenhouse gas emissions, when compared to non-OECD member nations, within a 90% confidence interval and an increase of 23 percentage points in exports of goods and services within a 95% confidence interval.

However, for states that have joined the OECD since the 90s, there has been no statistically significant change in any of these metrics. 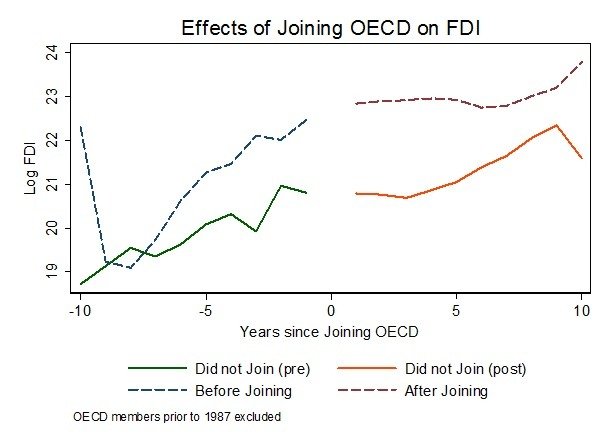 Giving up Developing Country status could result in losses for agribusiness exports. This would primarily be seen in the loss of access to Generalized System of Preferences (GSP) tariff rates that Brazil currently enjoys in Australia, Japan, New Zealand, Norway, Switzerland, and the US.

Nonetheless, how big such losses would be may be minimized in the difficulty that exporters encounter in applying to the GSPs and how many exporters who are unaware of the GSP tariff benefits pay MFN tariff levels. It is unclear how much of the GSP exporters are actually using. In addition to the losses of preferred tariff rates to Most Favored Nation (MFN) rates, Developing Country status confers a variety of advantages to said countries when negotiating trade deals, delaying the timing of implementing WTO agreements, and loosening of WTO member nations commitments to subsidies.

The regressions done in this analysis involved panel data from 1987-2018 in UNCTAD and the WTO database, controlling for small states, major agricultural net exporters, income level, and clustering standard errors by region.  Analysis of joining the OECD looked at the effects 10 years before and after joining the organization. The weak evidence of agribusiness export increases before joining may be due to adoption of policies recommended by the OECD during the application process. It could also be a function of having a strong economy that led them to be considered for OECD membership in the first place.

While the data does not reveal any statistically significant trends resulting from joining the OECD in FDI, agricultural and services exports, greenhouse gas emissions, or GDP growth rate, this is on the statistical level, and may not hold for Brazil individually. The data only studied the first 10 years before and after adoption, so results may take more time to accumulate. Also, the OECD is defined not only by its economic policies but also by its commitment to democracy. Many countries that qualify for joining the OECD on economic terms are excluded for political differences. By controlling for autocratic nations perhaps statistically significant results would emerge.

While the loss of Developing Country status would result in possible losses for agribusiness in terms of exports, it is likely that, even if Brazil had not applied to join the OECD, the US would eventually pressure Brazil to give up the status, as the European Union has done. The WTO has classified Brazil as an upper middle-income country since 2006, and even if Brazil were to refuse to give up the status, states are likely to continually weaken and remove the GSP advantages that Brazil enjoys. Already in some parts of Brazil’s FTA agreements there are provisions to disregard a country’s developing country status. The benefits that Brazil enjoys from Developing Country status will be continually eroded over time whether they give up the status or not.

However, under WTO rules nations cannot be forced to give up the status, and indeed South Korea, which no longer classified as a developing nation, has kept the status while being a member of the OECD.  Typically, nations that have kept the developing country status have done so strategically, only using the looser developing nation rules in situations where they deem they truly need to, and following the stricter developed nation rules in other areas.  If Brazil were to follow this example, it would significantly lessen criticism and the negative impacts of not giving up the status.

This system is under threat by bad actors such as China, which has used the developing country status in many circumstances. While China qualifies as a developing nation in most indexes, it is reliance on subsidies, and taking every advantage possible, rather than ones that are necessary (such as South Korea or Turkey), have caused the US to challenge the status quo of the current WTO self-reporting system.

However, if used as a bargaining chip, it would be more beneficially employed as a means to help agribusiness since it is agribusiness that will be hurt in the process. Perhaps coupling giving up the status with an FTA with the US along with OECD membership backing may be a better way to offset the costs. Additionally, since developing nation status is something that is self-reported, should Brazil enter a recession it can start reporting itself as a developing nation again.  While this may antagonize the US it is unlikely to incur much cost to Brazil. Claiming to be a developing country is not something that can cause expulsion from the OECD since other OECD members also claim the status.