After four intense days of meetings and technical visits in Japan, the entourage of Brazilian Farmers flew to China on Monday (13). The group is part of the delegation that followed the Brazilian Minister of Agriculture, Livestock and Supply, Tereza Cristina, on a 16-day mission through Asia.

The mission also illustrates the positive dialogue that exists among the private entities representing agriculture and the government in Brazil. To Muni Lourenço, vice president of CNA and president of the Federation of Agriculture and Livestock in the state of Amazon (FAEA), this connection is highly beneficial to agricultural exports.

“CNA will be permanently working in partnership with the Congress and the Ministry of Agriculture, which is in line with the leadership of Minister Tereza Cristina. This will strengthen the presence of Brazilian agribusiness products in the world market”, he said.

“The fact that government and the business community are together brings confidence to Asians in relation to Brazilian products. We are building a deep relationship, which is necessary for the advancement of the commercial ties that we seek in Asia”, said Moreira.

On Monday, the schedule began with a visit to Seesaw Coffee, a pioneer specialty coffee company in Shanghai. The Brazilian Specialty Coffee Association (BSCA) showed some of the finest specialty and boutique coffee grains that are now available to the Chinese, and stress the growth of the local coffee consumer market.

On the second day, Brazilian Farmers visited Brazil’s pavilion at Sial China, Asia’s largest food innovation exhibition, and fourth largest in the world. The event takes place once a year in Shanghai and focuses on meats, dairy, frozen foods and beverages, among others. The fair receives approximately 3,200 exhibitors and 110 thousand visitors in each edition and this year has 52 Brazilian companies from diverse sectors exposing products like honey, açaí, biscuits, pasta and mate herb. 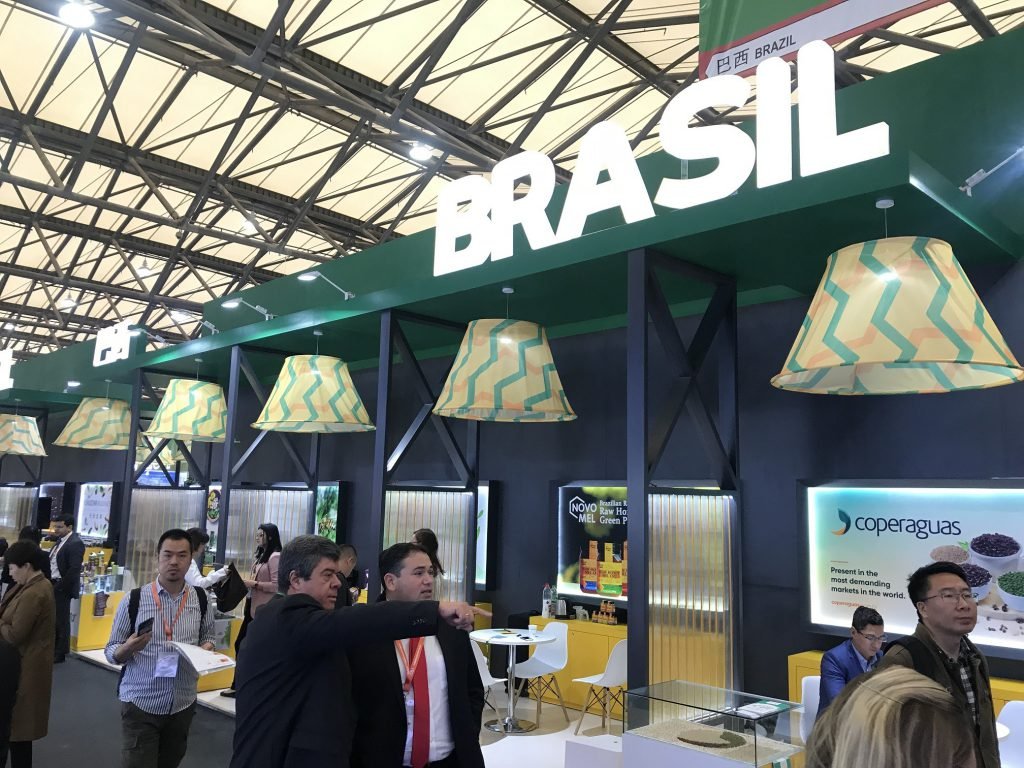 The group met with Brazilian entrepreneurs participating in the event and saw, first-hand, the enormous size of the Chinese market for food and beverages. “The companies selected to showcase their products are those that can boost business between Brazil and China. We took into consideration the consumption habits and what is being most demanded in China today,” said Gustavo Sperandio, of Apex-Brasil, responsible for the Brazilian pavilion at the fair. 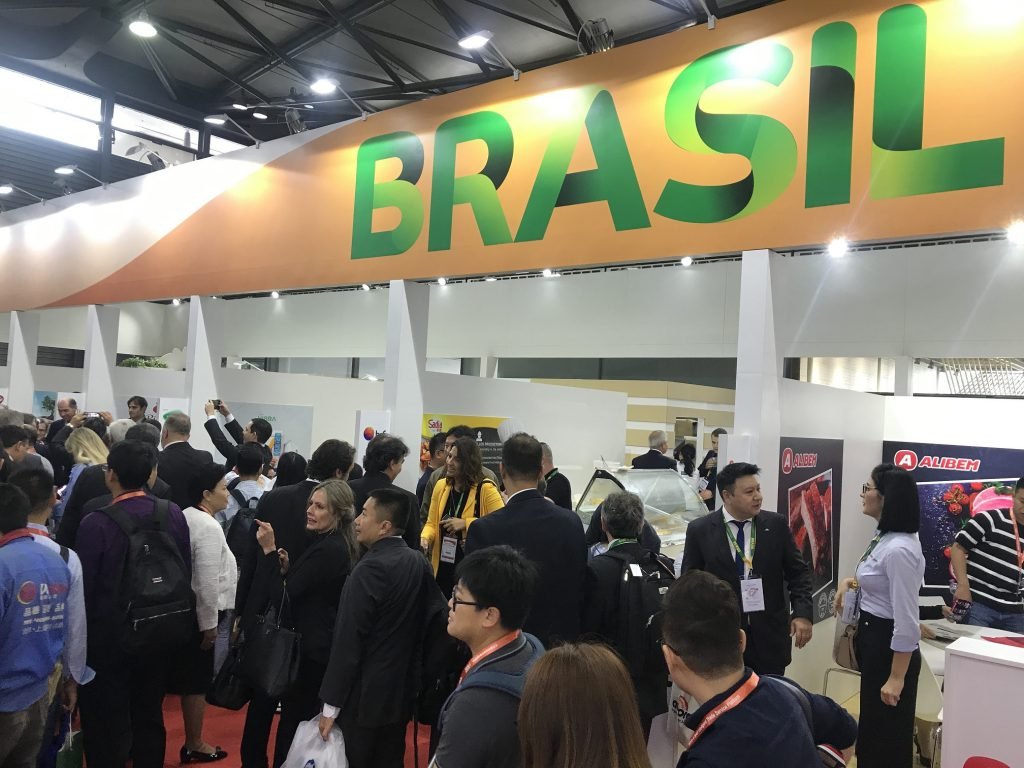 In the evaluation of the entrepreneurs who participate in Sial, the business opportunities are promising. According to Rafael Ferreira from Petruz Fruit, “açaí is not yet so well known in China, but in Asia we already have expressive exports to Japan, Singapore and South Korea. We hope that after participating in the fair we will be able to further expand our exports to China”. Petruz Fruit is based in Belem, capital city of the state of Para.

“It is very important that açai companies come to visit China. China has a huge market and Chinese consumers still do not know much about the product,” said Angel Zhu Melfi, Chinese partner of the Goola Acai, a company headquartered in the Brazilian state of Amazonas.

In the case of orange juice, CitrusBR executive director Ibiapaba Netto believes that negotiations between the Brazilian and Chinese governments to reduce export tariffs will be positive for the Brazilian product. “The expectations are great! China is an important partner of Brazilian orange juice. We already have a trade around 100 million dollars per year and it is possible to increase these exports. The Brazilian government is doing its part and we hope that the Chinese will be aware that we can open this market”, he said.

The delegation also attended the meeting of the Brazilian delegation to Rabobank, where the Minister Tereza Cristina made a presentation on the opportunities and challenges for Brazilian animal protein and oilseeds in China.

For the director of CNA, Gedeao Pereira, the meeting was instructive and showed a positive scenario for Brazil in the markets of grains and chicken and beef.

“Based on what we heard, China could take up to five years to recover from the current African swine fever outbreak. In the short time, we should see and increased in the consumption of other types of meat, such as chicken and beef. Regarding grains’ consumption, the Chinese are demonstrating that they will import nearly 11 million tons less in 2019 than they did last year. However, if we compare it to 2017, China will actually be importing 5 million tons more. This is the most important scenario for us as Brazil soy and meat producers”, said Mr. Pereira. 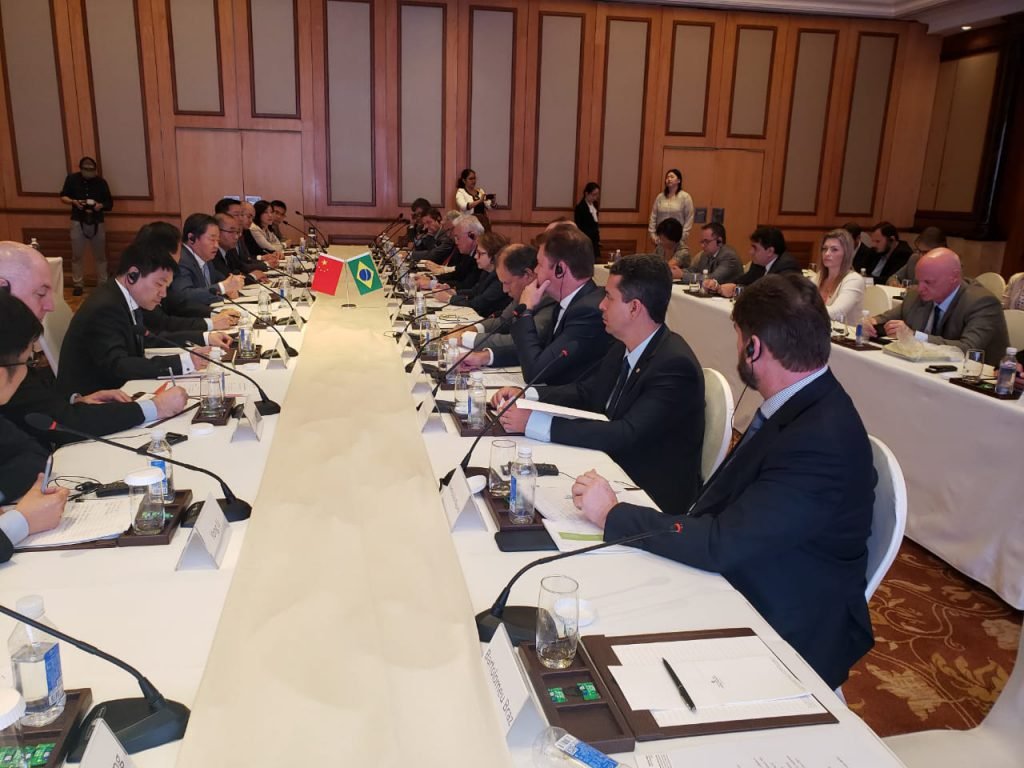 CNA’s vice president, Muni Lourenço, spoke about the work of CNA as a representative of the Brazilian rural class and reinforced that the agrochemicals defense is one of the main debate topics within the entity, as it seeks to guarantee the production of safe and high quality food in Brazil.

According to Alexandre Schenkel, vice president of the Brazilian Association of Cotton Producers (Abrapa), the meeting at Sinochem was good to show that the Brazilian productive sector is united and is aligned with government and parliament for the benefit of sustainable production and efficiency.

“We showed our relationship and the advantage of having a single voice today in Brazil. This relationship is very important to demonstrate our concern about the supply of chemicals that are used in our agricultural production. Therefore, the CNA, OCB, Abrapa, Aprosoja and various entities are united in favor of this subject”, said Schenkel.

Sinochem is China’s largest chemical company and produces around 25% of the world’s agrochemicals. It is part of a business group that owns brands such as Syngenta and Damar. 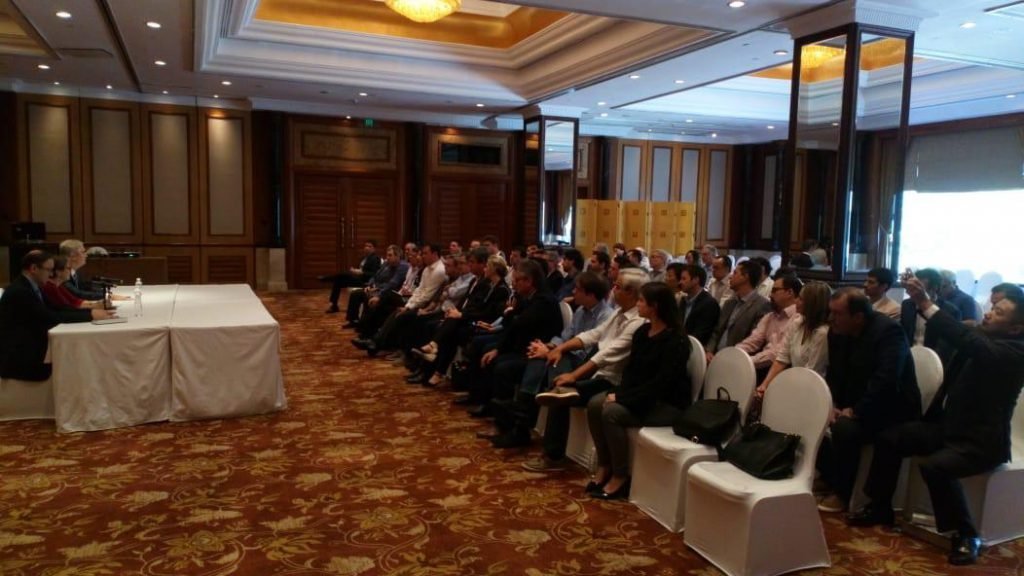 The Brazilian delegation also met with businessmen from other sectors, such as paper and information technology solutions. On Thursday, the visit was at be at the Agricultural University of China, where  the Minister discussed opportunities for cooperation in research in agriculture and livestock.

On Thursday (16) the group headed to Vietnam.