Brazilian Farmers have just come back from one of the multiple prospective missions to China scheduled for the end of 2019.

From October 17 to 25 the coordinator of International Relations, Camila Sande, participated in the technical mission organized by the Institute of Government Relations (Irelgov) to the Asian nation. The goal of the visit is to exchange experiences with representatives of the public and private sectors, and academia in Shanghai and Beijing.

The mission began in Shanghai, China’s most populous city and one of the world’s most dynamic finance, innovation and transportation hubs. On Thursday (17), the group visited the Shanghai Academy of Social Sciences and learned about the Chinese political and economic systems. In the afternoon, the delegation attended a meeting at the City Hall. 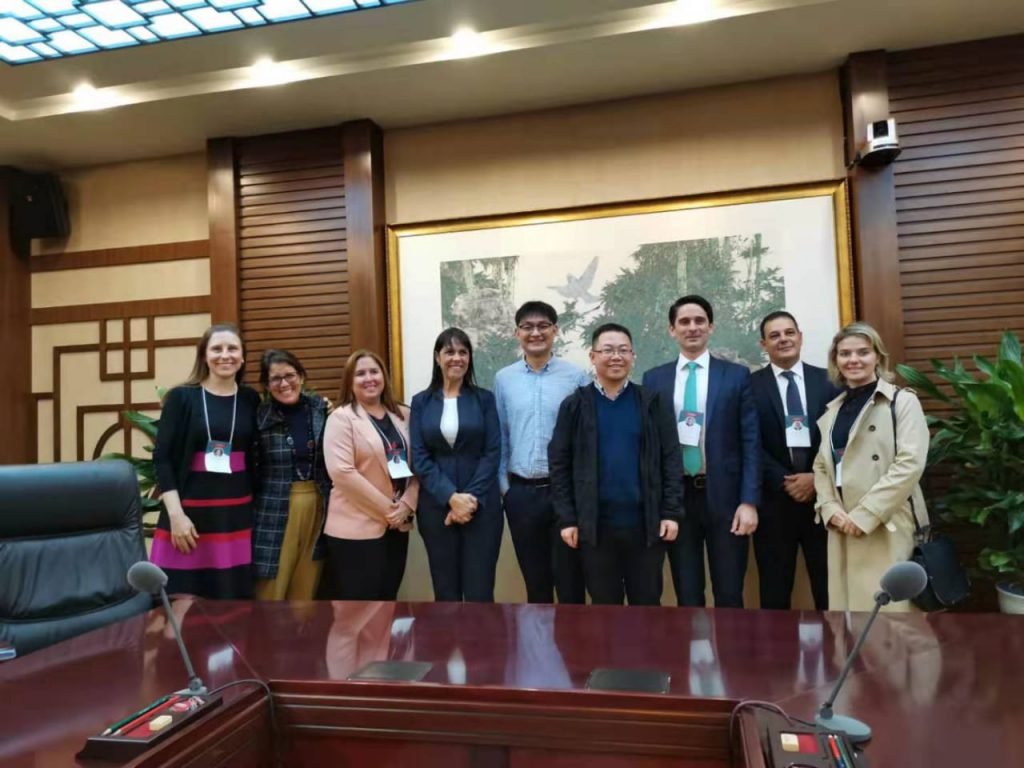 On Friday (18), the mission went to the Port of Shanghai, the world’s largest cargo handling terminal, built on an island called Yangshan. To reach the site, it is necessary to ride on a 32 km bridge. “Today the port has a capacity of 18 million containers per year. When the fourth and final phase of the construction is completed, the capacity will increase to 40 million. It’s an impressive structure that shows all the Chinese efficiency,” said Sande.

According to the representative of CNA, Brazil will have opportunities in terms of logistics and infrastructure with the operational capacity of the port. “It is noteworthy that the port has no bulk terminal, but we are interested in selling more value-added products. So it fully meets the expectations of our agro internationalization project.”

The delegation also visited the city’s stock exchange and attended a meeting at the São Paulo state office in China.

On Monday (21) the group headed to Beijing, where it attended a meeting at the National Reform and Development Commission (NDRC). The Commission was created 41 years ago to propose integrated policies from various sectors for China’s development. The group was welcomed by NDRC Deputy Director General Gao Jian. 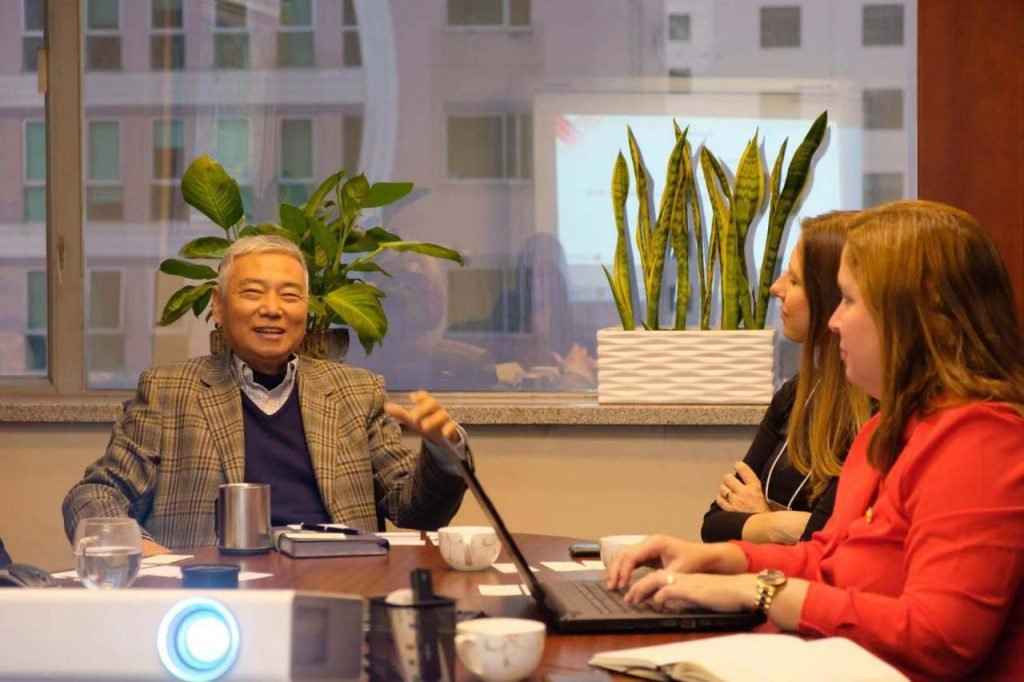 “The purpose of the meeting was to understand how this process works, whether they influence foreign investment decisions and how the Brazilian private sector can strengthen ties with them to better understand Chinese medium and long-term strategies,” Camila reported.

The Brazilian delegation also visited Peking University, where they attended lectures on the decision-making process of Chinese policy and the country’s economic transformation in recent decades. “I gained a tremendous knowledge of China’s political and economic system at both Beijing and Shanghai universities. It’s a country that we need to understand more and more,” said Camila. Peking University is one of the best-ranked universities in the world. 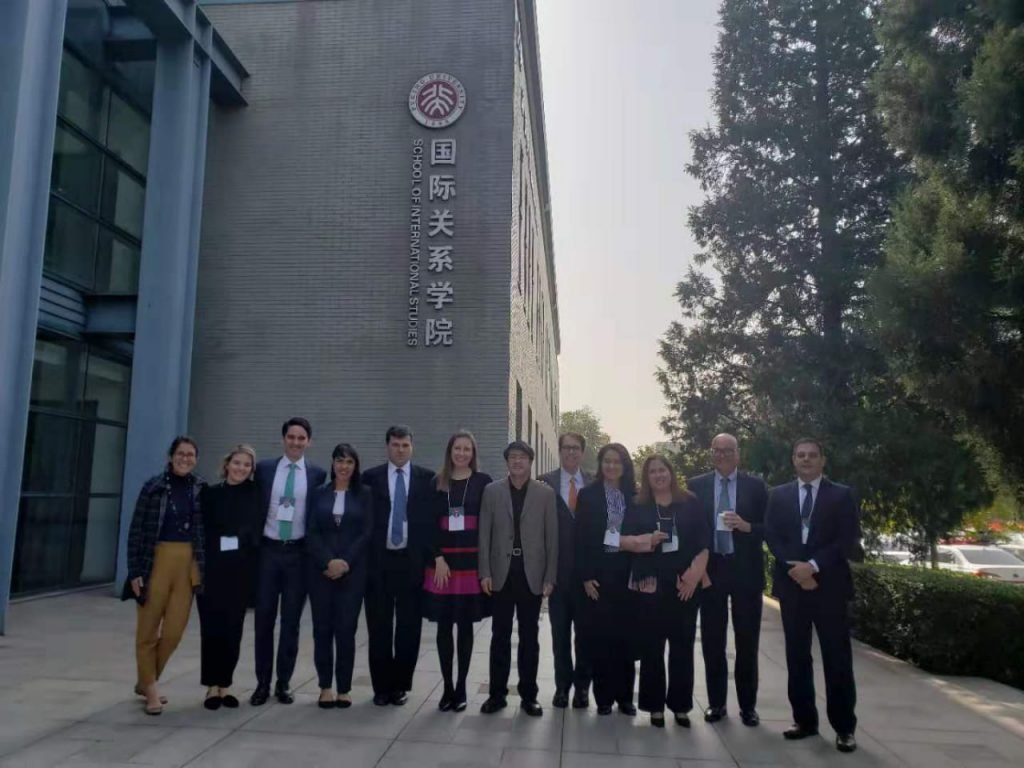 “Today, the Chinese economy is moving from manufacturing to an economy with technological innovation. This is one of the points of greatest conflict with the Americans in the trade war” Camila explained.

Peking University professor Pan Wei said that the Chinese are interested in importing food products from Brazil and that quality is increasingly fundamental to China.

Also on Monday, the entourage met with representatives of the Ministry of Ecology and Environment. “The big theme in China is the environment. The focus is on making the country a green and sustainable civilization by 2035”, concluded the coordinator.

On Tuesday (22), the group met with representatives of the Ministry of Agriculture and Rural Affairs of China. During the visit, strategic information on the country’s agricultural production was presented, especially regarding government subsidies to farmers. 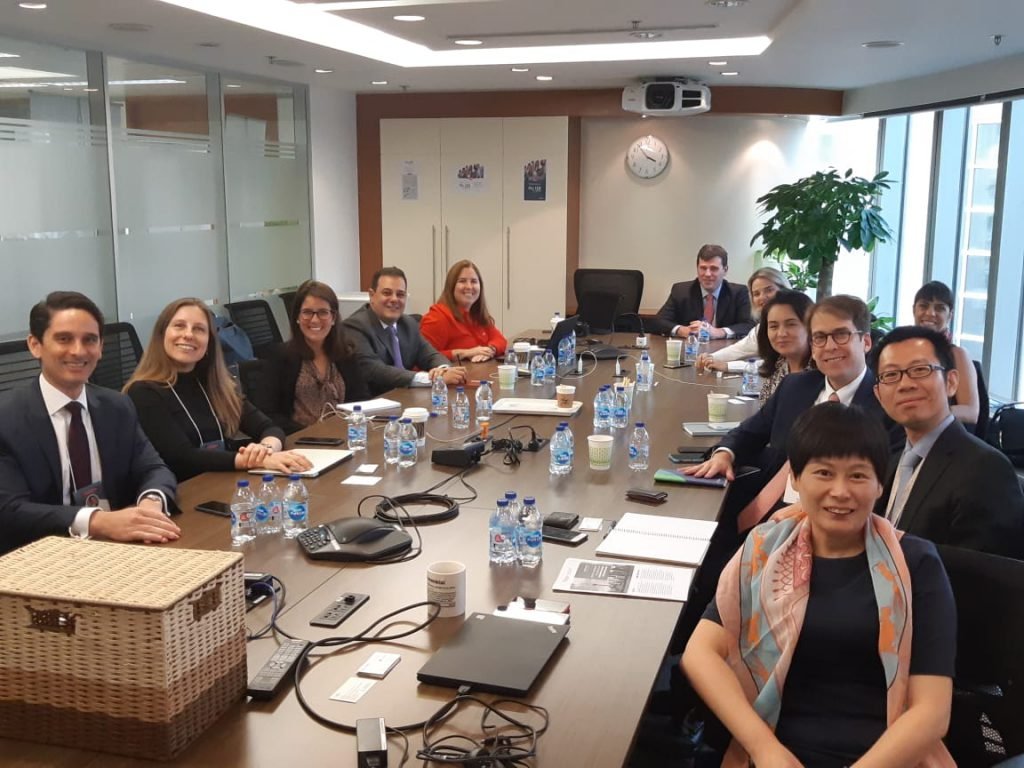 “Their focus is on the production of corn, wheat, beans, sorghum, rice, potatoes, fruits and vegetables. Soybeans, for example, they said they can produce but chose to import,” explained Camila Sande.

According to Camila, the entire Chinese production chain receives financial support from the government. “The amazing thing is how they do their production data collection surveys to find out how and how much they are going to give out to farmers. If the farmer doesn’t have the expected production, they go to the field to find out what happened and if the resource was passed on to them.”

The mission delegation also visited the Brazilian Embassy in China, where it was received by the minister, Celso de Tarso. 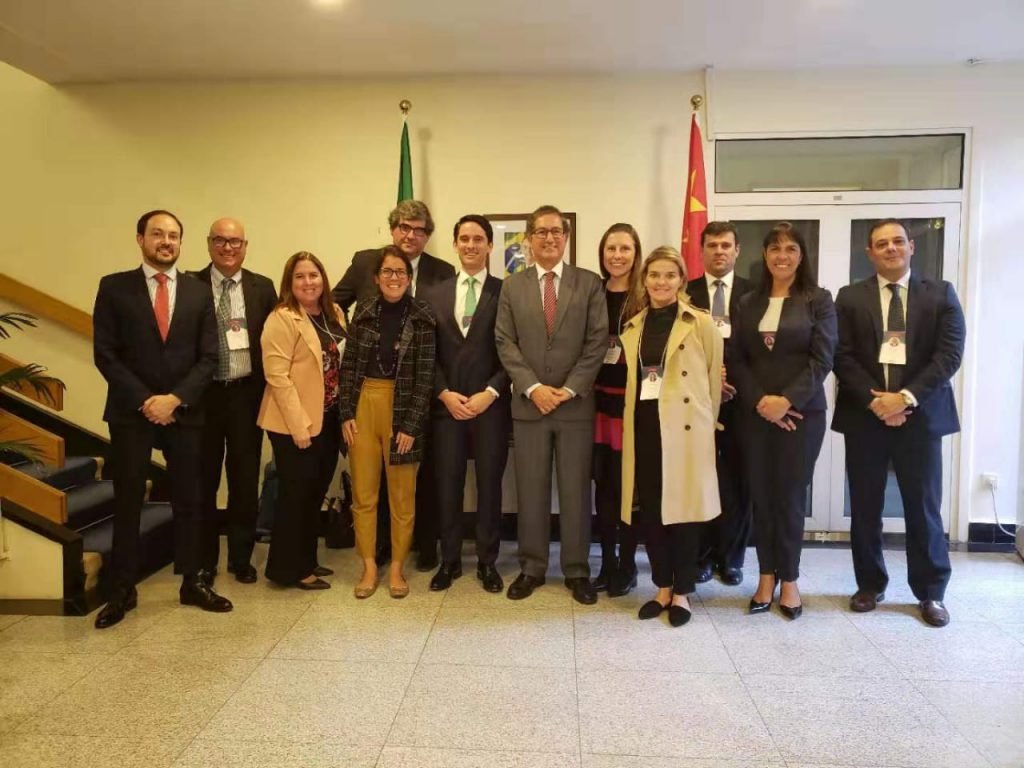 “The country’s political and economic landscape and strategies for concrete business opportunities with the Chinese were presented. It was an opportunity to show what we, Brazilian farmers, can sell and know what they want to buy,” said Camila.

For Brazilian Farmers, the results of the technical mission will help to put the Agro Internationalization Project in practice. This is CNA’s project to insert small and medium producers and exporters of agro in international trade.

“There is demand and we are here to learn and to know the best way to bring these products here,” concluded Sande. 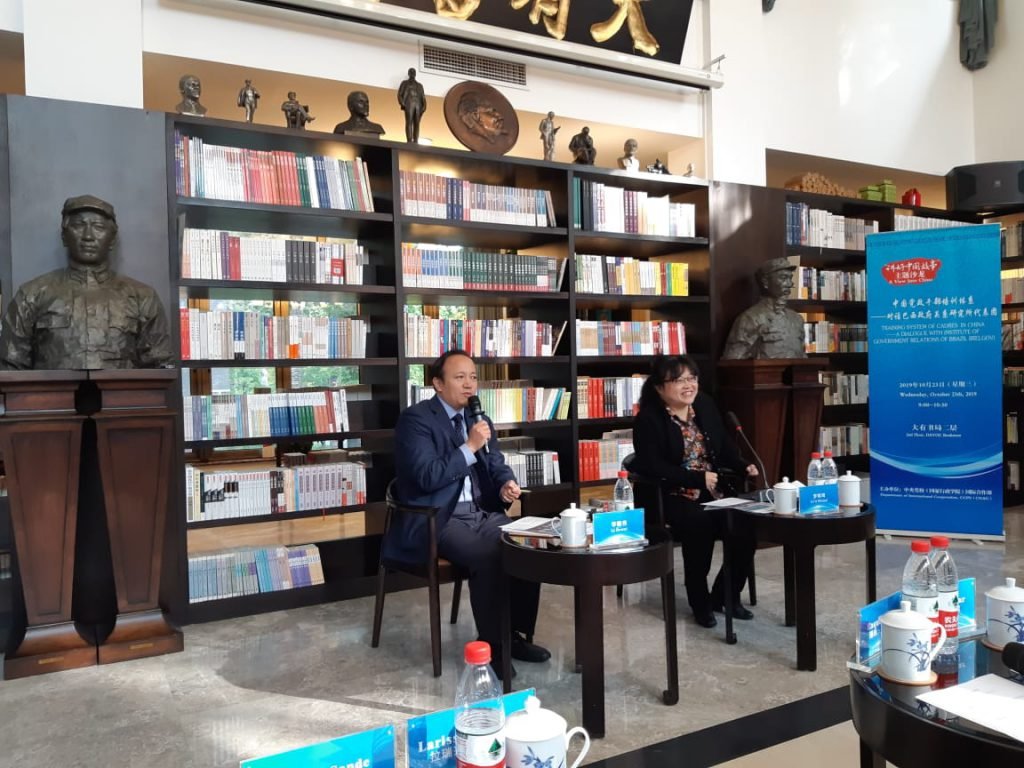 On Friday (25), the technical mission ended at the Brazil-China Business Seminar, promoted by the Ministry of Foreign Affairs and the Brazilian Export and Investment Promotion Agency (Apex-Brasil).

The opening of the Seminar was attended by the President of the Republic, Jair Bolsonaro, the Minister of Agriculture, Livestock and Supply, Tereza Cristina, the Minister Chief of Staff, Onyx Lorenzoni, the Vice Minister of Commerce, Wang Shouwen, and other Chinese and Brazilian authorities. 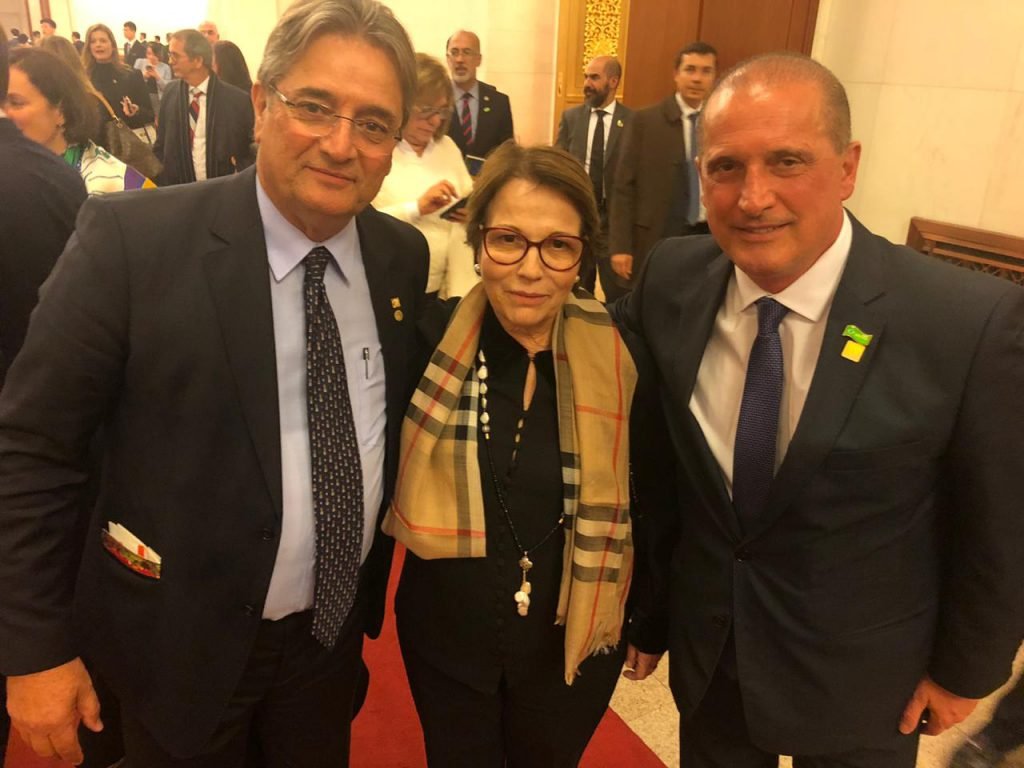 According to Camila Sande, during the seminar, the celebration of the 45 years of relations between the two countries was highlighted. “China today is Brazil’s largest foreign investor and first agricultural partner since 2008.”

In her speech, Minister Tereza Cristina expressed concern about the concentration of soybean in agricultural exports from Brazil to China. She also talked about the importance of biotechnology and presented data on the safety of the Sanitary Surveillance System, which guarantees safe food for the Chinese.

CNA’s Director of International Relations, Gedeão Pereira, attended the seminar, as part of the Brazilian presidential entourage to Asia.

“The interdependence that exists between countries is very clear. Brazil as a very strong supplier of foods such as soy, corn, pork, beef and chicken and China as an investor in important areas such as infrastructure and logistics,” he said.

The seminar was held in partnership with the China-Brazil Business Council and the Chinese Council for International Investment Promotion (CCIIP) and was supported by the China Development Bank (CDB).

“Brazil has been seen by the Chinese as a great partner. These days of visits and meetings were opportunities to learn how China works. I return to Brazil with an extensive knowledge to help our rural producer to insert more products in this giant market”, concluded Camila Sande.